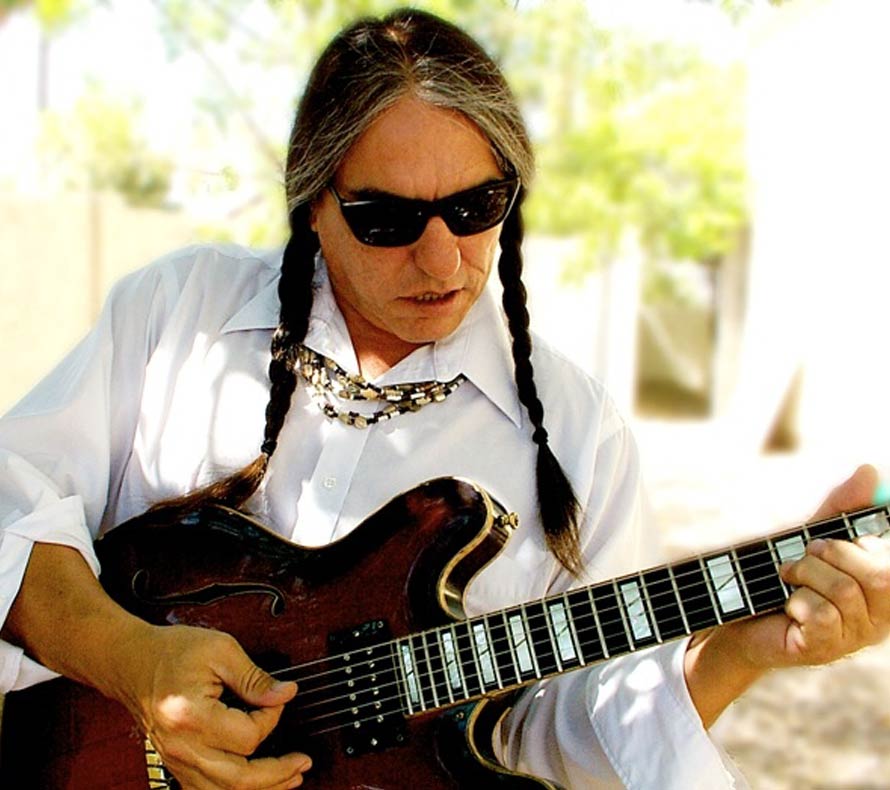 Keith Secola is an icon and ambassador of Native music. He is one of the most influential artists in the field today. Rising from the grassroots of North America, he is a songwriter of the people. Critics have dubbed him as the Native versions of both Neil Young and Bruce Springsteen. NDN Kars (Indian cars), his most popular song is considered the contemporary Native American anthem, achieving legendary status and earning him a well deserved cult following. It has been the number one requested song on tribal radio since the 1992. In 2011, he joined the ranks of Jimmy Hendrix, Hank Williams, Crystal Gale, and Richie Valens, and was inducted into the Native Music Hall of Fame.

Born in 1957 in Cook, Minnesota, Secola is affiliated with the Anishinabe tribe. He graduated from Mesabi Community College with a degree in Public Service in 1979, and completed a BA in American Indian Studies at the University of Minnesota in 1982. He is married and has two children.

Secola is an accomplished artist, garnering awards and accolades as a musician, a singer, a songwriter, a composer and a producer. He is highly skilled with the guitar, flute, mandolin, banjo, harmonica, and piano, and has played in venues from the halls of the Chicago Urban Indian Centre, to the walls of the bottom of the Grand Canyon. He has also performed at the Olympic Games in Atlanta 1996 and Salt Lake City 2002, and toured Europe several times. Released a four albums with European record company in the 90, songs charted throughout Europe. Did concert dates with Towns Van Zant and Nirvana. Among his numerous appearances he has graced the stages of the Rockslide Festival in Denmark, the Grand Opening Gala of the Smithsonian Museum of the American Indian, The Kennedy Center and the SXSW in Austin, TX, and is a staple at the Grassroots Festival in Upstate New York, North Carolina and Florida.

A seven-time Native American Music Award winner, Secola has earned NAMMYs not only for his music, but also his abilities as a producer, to include The Best Linguistic Recording for producing ANISHINABEMOIN (2007). A well respected musician, he has worked with music legends such as Mickey Hart of the Grateful Dead. Secola has also teamed with academics like author Dr. Tom Venum of the Smithsonian Folklife Institute, collaborating on the CD, AMERICAN WARRIORS: SONGS FOR INDIAN VETERANS, and with elders such as Karen Drift, a speaker of Anishenabemoin.

Secola has self-produced five well received independent CDs, since the early 1990s. The first, CIRCLE (1992) is a compilation of selected songs from previous cassette recordings: INDIAN CARS (1987), TIME FLYS LIKE AN ARROW…FRUIT FLIES LIKE A BANANA (1990), and ACOUSTIC AROMA (1991), and features the classic hit NDN Kars. Secola’s second album WILD BAND OF INDIANS (1998) is best known for fan favorites like Frybread, 4R Ancestors, and Wide Open Spaces. Twenty-four instrumental tracks featuring flute, guitar, and percussion by Secola provide a rich audible environment on HOMELAND (2001), the soundtrack for the PBS documentary film of the same name. His third album on his own label Akina Records, FINGERMONY (2000) is best classified as “Alter-Native” showcasing an eclectic compilation running from beautiful instrumental ballads and Native rhythms to on-the-edge Rock, Folk-inspired tales, and Blues and Reggae sounds. NATIVE AMERICANA (2006) followed, and demonstrates a whole new bag of musical tricks, fusing traditional sounds with contemporary ones earning Secola a NAMMY for Kokopelli Blues, a song that resets a traditional icon in a modern world with a blues track that features Native flute. Secola’s long anticipated sixth album LIFE IS GRAND (2012) is a sixteen song collection of Rock and Folk, merging roots music with a Native soul and demonstrating a new level of artistic maturity.